Florida also has a rich diversity of vertebrate animals including: 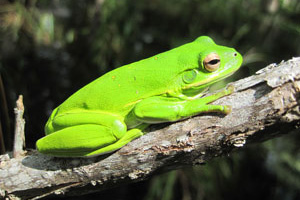 Amphibians such as salamanders and frogs are animals that usually lay their eggs in water. Northern Florida is home to some very large aquatic salamanders, including amphiumas and sirens, that never leave the water. Other salamanders such as the peninsula newt have terrestrial adults, but their eggs and larvae are aquatic. Similarly, many kinds of tree frogs (southern spring peeper, green, pinewoods, barking, and squirrel tree frog) have terrestrial adults. In contrast, the bullfrog, bronze frog, pig frog, river frog, and southern leopard frog are usually found in water. However, on rainy nights adults of these larger frogs often disperse and can sometimes be found hopping across roads, fields, and yards as they search for new homes.

The Cuban tree frog is an exotic species in Florida that eats our native tree frogs. This invasive species has been spreading, but is found mostly in urban areas in northern Florida. 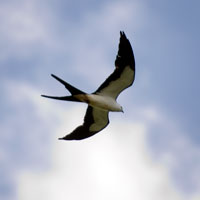 North Florida is a bird watcher's paradise with a great diversity of water birds ranging from ducks to white pelicans and purple gallinules as well as wading birds. The great egret, great blue heron, tricolored heron, snowy egret, and other wading birds can be frequently seen near water. Limpkins are more secretive as they forage along river banks for their favorite meal of apple snails. Their loud, mournful calls are quite distinct. Flocks of white ibises fly in "V" formation to their roosts in the evening and to feeding grounds in the morning. During the winter and spring the eerie calls of sandhill cranes pierce the sky.

In the water, double-crested cormorants and anhingas hunt for fish. Common moorhens and American coots forage for small invertebrates and aquatic plants along marshy shorelines. In nearby swamps, you may hear the taunting call of a red-shouldered hawk or hoot of a barred owl. As you canoe or kayak down river, it's exciting to view a pair of graceful swallow-tailed kites as they soar overhead, dipping and diving above the treetops. 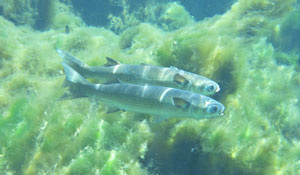 One of the more unusual features of the fish community is the presence of marine species in rivers and springs. Typical marine fish found in springs include gray snapper, striped mullet, Atlantic needlefish, gulf pipefish, and hogchoker, which resembles a miniature flounder. Anadromous fish, such as the American eel and gulf sturgeon, live mostly in the ocean, but swim up rivers to spawn. The Suwannee River hosts the largest population of the imperiled gulf sturgeon. These large, prehistoric-looking fish are famous for their frequent jumps and loud splashes. It’s best to go slow on the Suwannee River, especially from May through August, to avoid an accident with a jumping sturgeon. 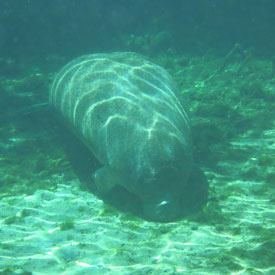 While visiting a spring, you may see a variety of wild animals or their tracks. Deer, bobcats, raccoons, and other animals come to the water's edge to drink and to search for food. While canoeing, you may observe beavers and their dams, or be followed by a curious river otter. In the lower Suwannee River and other coastal rivers, you may also see an endangered West Indian manatee. During the winter months, manatees gather in springs such as at Manatee Spring because the water is relatively warm. Manatees can die from hypothermia if the water temperature drops below 68 degrees Fahrenheit, but spring water from the ground usually ranges in the balmy 70s. 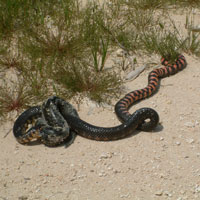 Water snakes of several kinds are often seen in rivers, springs, and lakes in the District. Most are harmless to people, but they will bite if threatened. The brown water snake is light brown with large dark brown spots. You may see water snakes swimming underwater or basking in vegetation along the shore. The harmless mud snake is blackish on top, but has a checkered red and black belly.

Water moccasins are also very common snakes in swamps, marshes, and along the edges of rivers and lakes. These thick-bodied pit vipers have fangs and venom to quickly subdue fish and other prey. Young water moccasins are brightly patterned, but the adults are mostly blackish with a thick dark line through the eye. They will open their mouth and flash the bright white lining as a warning if threatened.

Turtles are fun to watch, piled up on logs, basking in the sun with their feet outstretched, and tumbling into the water if approached too closely. There are a number of different kinds of basking turtles in northern Florida including the chicken turtle, river cooter, Florida redbelly cooter, peninsula cooter, Suwannee cooter, and pond slider. Florida softshell turtles stick their snake-like heads out of the water occasionally to breath. The Suwannee alligator snapping turtle is our largest freshwater turtle. It sits on the bottom of rivers with its mouth open, but snaps it shut on fish attracted by its wriggling, red, worm-like tongue. Mud turtles and musk turtles are small turtles with large heads that are common aquatic species in the District.