The discharge of a spring, also called its flow, is the volume of water passing a certain point during a certain time. Measuring spring flow is another way of characterizing a spring's overall condition. It is typically measured in cubic feet per second (CFS) or in million gallons per day (MGD), although smaller springs can be measured in gallons per minute (GPM). Discharge measurements from a spring also have a directional component.

Typically groundwater flows out of a spring, down a spring run, into a river, and eventually ends up in the ocean. However, the springs found within the Suwannee River Water Management District (SRWMD) have very dynamic flows that can be greatly affected by both the level of the river into which it flows, and the groundwater levels within the springshed. During high river stages, river water pushes back against the ground water, slowing stopping, or even reversing a spring's flow. On the other hand, low river levels can produce large differences between groundwater and surface levels, resulting in high spring flows. Some of the District's highest recorded spring flow measurements were conducted in 1998 when river levels dropped during a drought that occurred after a wet winter, which had raised groundwater levels. 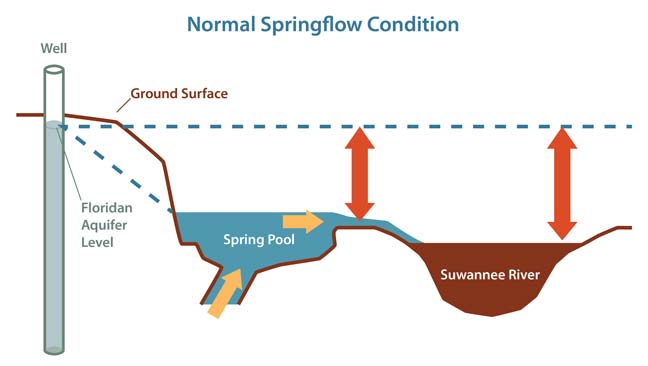 Typically groundwater levels are higher than river levels and flow out of a spring, down a spring run, into a river, and eventually end up in the ocean. 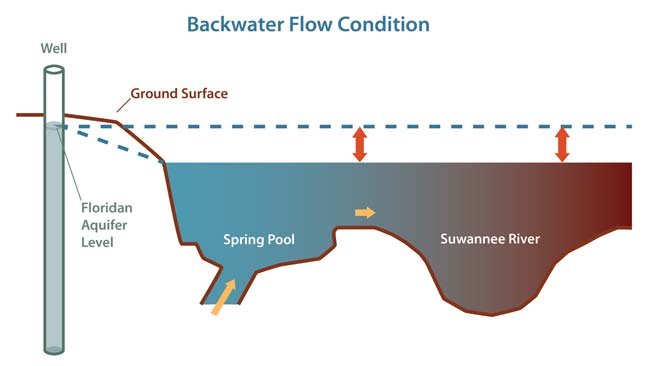 When the river stage is equal to groundwater level, the river will act like a temporary "dam," slowing or stopping a spring's flow. 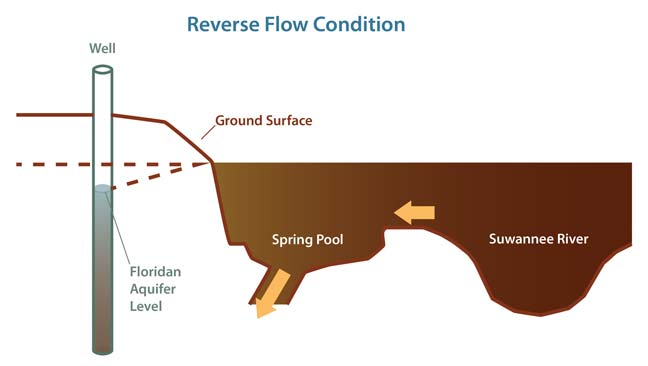 When the river stage becomes higher than groundwater levels, a reversing of a spring's flow can occur. Reversals result in the river water flowing back into the spring and aquifer, providing an important groundwater recharge point.

Flow can be measured using varying types of equipment. Depending on field conditions present at the time of measurement, the U.S. Geological Survey (USGS) and the SRWMD will use either mechanical meters that come in different sizes or acoustic doppler meters. For an excellent introduction to how both flow and stage are measured and recorded, please visit this USGS webpage.

The German hydrologist O. Meinzer developed a classification of springs based on the average annual discharge. This classification system called the spring magnitude scale remains one of the most common ways of describing the "size" of a spring. Although a spring may be classified in a certain magnitude, it may not always flow at that rate for many reasons, including river level, groundwater lever, local rainfall, and human consumption. The categories are outlined in the following table.