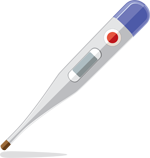 On this dashboard temperature is shown in Celsius. Refer to the following chart to see how these temperature scales compare.

Usually the temperature of groundwater emerging from any particular spring remains constant regardless of the air temperature. Temperature affects the type and rate of chemical reactions and microbial activity occurring in the water. Since temperature has this affect, several parameters measured by scientists use equations to correct for temperature in order to more easily compare measurements over time and at different locations. Also many plants and animals can only survive in specific temperature ranges, and springs provide a relatively stable environment for these organisms. Springs also provide a refuge of relatively warmer water in the cold winter months for animals such as Manatees, and a wonderful place to cool off in the hot summer months for all of us humans.