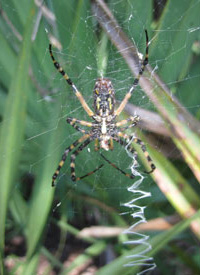 What is an Invertebrate?

Most aquatic invertebrates spend their entire lives, from egg to the adult stage, under water. However, many insects such as mayflies, dragonflies, stoneflies, dobsonflies, caddisflies, and midges are aquatic only in the immature stages. Their adults have wings and fly around to find mates and disperse and are not aquatic. Adults of other insects like hemipterans, beetles, and even some moths can live both underwater and also fly in the air. Although many aquatic invertebrates are active in the daytime, others only come out of hiding at night to feed or emerge as adults, which helps avoid being eaten by fish.

Like all animals, invertebrates must take in oxygen and get rid of carbon dioxide through respiration. Very small aquatic invertebrates simply exchange these dissolved gases from their blood to the water through their integument or "skin." However, water scorpions breathe air from the surface through a snorkel-like tube, while other hemipterans and beetles carry an air bubble with them under water. Some invertebrates, especially larval insects, have gills. "Blood worms" are the bright red larvae of midges that live in oxygen-poor bottom sediments. They do not feed on blood, but rather have a form of hemoglobin in their bodies to help extract oxygen from the water.

The various kinds of aquatic invertebrates have a diversity of life styles and habitat preferences. They may be surface dwellers that skate or walk on top of the water, swimmers that paddle through the water, crawlers that cling to hard substrates, or burrowers that tunnel in soft sediments. Since aquatic invertebrates are eaten by fish, and fish are good at finding them, most hide in thick vegetation or mats of tree roots growing in the water along the shoreline. Some live under rocks or in packs of dead leaves or cling to submerged pieces of wood. Others burrow in rotting wood, under loose bark, or in sand or mud.

Aquatic invertebrates find food in various ways. Grazers chew green plants or leafy algae, scrapers rasp organic films and diatom algae from surfaces, piercers suck plant or animal juices, shredders eat dead leaves, caddisflies spin silk nets to catch their food, and filter feeders strain tiny particles from the water. Many invertebrates are predators that hunt and eat other animals or are parasites that suck body fluids from other creatures, usually without killing them. The tiny larvae of freshwater mussels begin as parasites on the gills of fish before settling down in the bottom sediments to become filter feeders.

Certain kinds of crustaceans (crayfish, isopods, and amphipods) are adapted to living in water underground in the caves and conduits that form the Floridan aquifer. Many are blind and pale or whitish in color. Divers sometimes report large numbers of these troglobitic species in the caves that give rise to Madison Blue Spring, Peacock Springs, Manatee Springs, and many other springs.

The Coffee Spring siltsnail (Floridobia mica) is unique to the Suwannee River Water Management District. This tiny aquatic snail is only known to occur in one small spring at Ichetucknee Springs State Park in Suwannee County. More than a dozen kinds of freshwater mussels occur in rivers and lakes in the District. The Suwannee moccasinshell (Medionidus walkeri) and the oval pigtoe (Pleurobema pyriforme) are two species that have declined in abundance for unknown reasons and are now considered to be imperiled.

The island apple snail and channeled apple snail are exotic species that were accidentally introduced into Florida waters via aquarium releases. These large aquatic snails lay masses of small pink eggs on emergent plants, posts, bridge supports, and other structures. They are established in some lakes such as Alligator Lake near Lake City and associated streams. It is important not to move or release these invasive snails since they can disrupt natural systems and displace native species.