Natural communities are associations of plant and animal species that often occur together due to soil and water conditions, climate, fire frequency, and other factors. Plant communities of northern Florida that are typically wet at least part of the year include hydric hammocks, hydric flatwoods, wet prairies, seepage slopes, swamps, marshes, and aquatic beds. 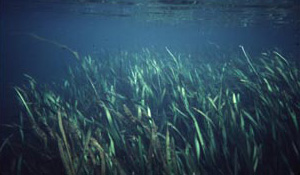 The clear water and sandy substrates of north Florida's spring runs, groundwater fed rivers, and estuaries offer a perfect environment for submerged aquatic vegetation to flourish and form dense beds. Aquatic plants are important habitat for a wide variety of invertebrates, fish, and other animals, and are food for manatees and turtles. Common submersed plants in freshwater systems of the District include American eelgrass, springtape, southern naiad, Carolina fanwort, and coontail. Shallow water areas may be dominated by water lilies with floating leaves or spikey bulrushes and cattails that have emergent narrow or strap-like leaves. 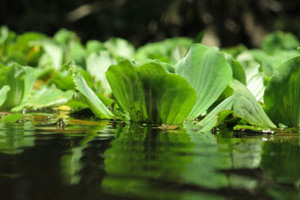 Freshwater marshes usually have an abundance of grasses such as maidencane and sedges such as sawgrass. Salt marshes along the coast are typically dominated by black needle rush and cordgrass. Marshy areas of spring runs often have cardinal flower, wild rice, and a variety of other interesting wildflowers and grasses. In marshy lakes and ponds, American lotuses produce gorgeous yellow flowers in early summer.

In addition to plants, more than 900 different kinds of algae including cyanobacteria (blue-green algae), diatoms, green algae, and others have been reported from rivers and lakes in northern Florida. Muskgrass (Chara species) is a large alga that forms dense beds in some spring runs and lakes. Nutrient enrichment of waterbodies can upset aquatic ecosystems leading to increased growth of nuisance and/or harmful algae that smother aquatic plants and deplete dissolved oxygen from the water. Some kinds of algae also produce toxins. 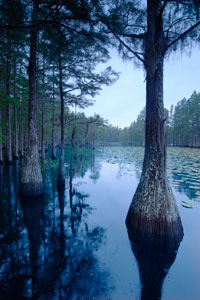 A few exotic aquatic plants have unfortunately become common in Florida and can cause problems with navigation, water flow, and crowding out of native species. Millions of dollars are spent each year in Florida to control hydrilla, water hyacinth, torpedograss, and others. Cleaning vegetation from boat trailers and propellers helps prevent the spread of invasive plants.

During spring, native wild azaleas bloom on the high banks of the Suwannee and Santa Fe rivers. In lower-lying areas, spiderlilies and atamasco lilies show off their large white flowers in spring. Buttonbush, with its white "pom-pom like" flowers, and lacey-leaved ferns grow in swamps. Appearing in late summer and fall are the bright red cardinal flower, yellow burrmarigolds, and purple climbing aster. The leaves of tupelo trees and red maples turn color in the fall, adding splashes of crimson and burgundy to the forest foliage.